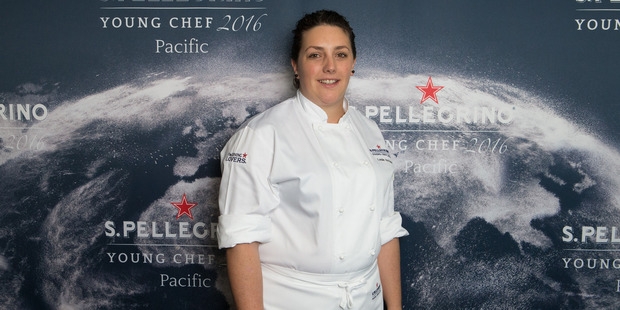 The 29-year-old, who was the only female semi-finalist, was deemed the winner with her gnocchi tortellini by some of Australia’s top chefs at a glitzy dinner after the semi-finals of the S.Pellegrino Young Chef competition held in The Crown hotel’s culinarium over the past two days.

Hottiaux, head chef and co-owner of French restaurant Apero Food & Wine, cooked her dish on Sunday and was a clear favourite of the judges after whipping up the tortellini which was filled with four different types of mushrooms - portobello, shitaki, oyster and button - burnt butter and pineut sauce on a bed of crème fraiche.

Hottaiux described her dish as “excellent” after cooking and was hoping for a win but was surprised yet proud to take it out.

Hottaiux described her dish as “excellent” after cooking and was hoping for a win but was surprised yet proud to take it out.
“What I put on the plate was exactly what I wanted so it was great. I didn’t think I would win. It’s really cool. Go the women.”

It was extra special recognition as the dish was made especially for her France-based parents who were coming to visit her restaurant for the first time.

Hottaiux now goes on to represent Australasia at the World finals of the S.Pellegrino Young Chef competition in Milan in October.