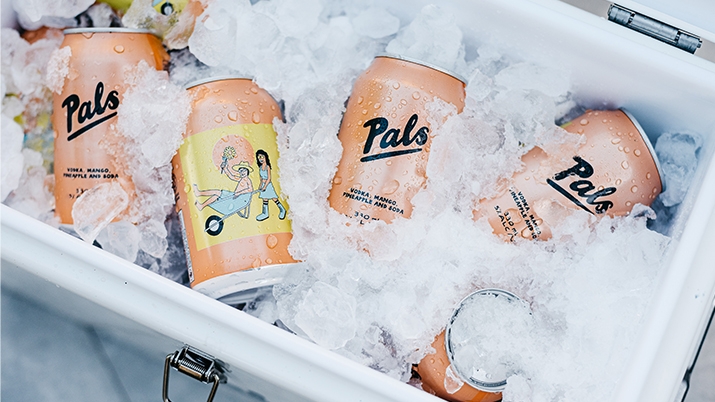 PALS NEW FLAVOUR IS SET TO BE A SUMMER FAVOURITE

Get ready to kick off summer early with the Pal’s new Vodka, Mango, Pineapple & Soda, another refreshing tropical flavour to add to their line up of ‘better for you’ RTD’s.

Kiwi favourite RTD brand Pals, has done it again with their new delicious drop hitting stores across the country from 7th October 2021. Vodka, Mango, Pineapple & Soda is the ultimate refreshing tropical drink, using natural tropical flavours, paired with premium vodka and all natural ingredients. This flavour will be launching nationwide in both New Zealand and Australia making it the perfect pal for your summer.

Pals are known for their originality and creative thinking, and their new product launch is certainly testament to that. With a large number of new RTD/seltzer brands and flavours being released, it was crucial for the Pals team that they continued to think differently with their approach to launching a highly anticipated new flavour.

“Originality and innovative thinking is critical to everything we do. We’ve really engrained this thought process throughout the team. The starting point for this launch was a simple question, ‘what would everyone else do’ then let’s make sure we don’t do that. A typical launch would see a brand focus on the flavour and tease with a tropical setting, or use of key ingredients, but as consumers we’ve all seen that a thousand times over.”

“We wanted to create ambiguity and talking points around what we were doing. We thought pulling out a small element of the can illustration, being the sunflower, was a great way to do this.” says Mat.

The hardest part of this approach was keeping the launch a complete secret. No one outside of the small Pals team and manufacturers were told or had any idea of what the flavour was.

“We had a grand plan of trying to release a new product nationwide at the same time on the same day without anyone knowing what it was. To do this, we had to somehow convince nearly every liquor store in the country to buy the new product from us without actually knowing what it would be until the day before it was set to launch. Ambitious plan but we managed to pull it off”, says Nick.

Pals continues to grow from strength to strength, from their successful foray into the zero alcohol category and winning a historic tender with Eden Park as the official pourage partner for its first ever concert, proving that they are the challenger brand to watch. Making headway on the international platform earlier this month, Pals won ‘Best new brand’ and ‘Best alcohol drink’ at the World Beverage Innovation Awards with their best selling flavour, Vodka, Central Otago Peach, passionfruit and soda. Closer to home, Pals continues to expand their Australian business with additional 1,700 stockists and adds to the range with four flavours now available nationwide at Dan Murphy’s and BWS. Even our Pacific and Cook Island pals are getting a taste of this new drop with the launch of Pals in August this year.

Like Pals’ other flavours, the new Vodka, Mango, Pineapple & Soda has no artificial colours, sweeteners or preservatives and contains all-natural flavours. It’s vegan, gluten-friendly and features 30 calories per 100ml. Pals continue to hero ‘clean drinking’ to deliver a silky smooth taste. Pals aren’t brewed from beer or wine like seltzers meaning there’s no funny aftertastes from the brewing process.