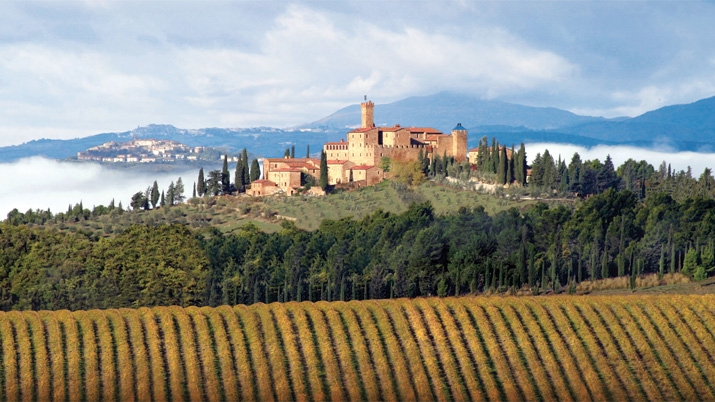 With the recent raft of quality Italian dining venues entering the hospo landscape - such as Gusto, Farina and Baduzzi, to name just a few - it has become increasingly important for suppliers to the trade to source authentic and exciting produce that meets the demands of these discerning venues, and most importantly their customers. Castello Banfi, a flagship producer from Tuscany, Italy, has recently become available to the NZ trade via international beverage distributors, Federal Merchants & Co.

It would be easy to forget that the modern day wine estate of Catello Banfi - located in the hillside town of Montalcino, Tuscany – was only established in 1978, such is the status this enterprise has ambitiously created for itself in a wine region whose roots trace back to the ancient Etruscans.

Fast forward to 1919, over two and a half thousand years on from Tuscany’s early beginnings, to when Italian immigrant Giovanni Mariani established Banfi Vintners in New York’s Little Italy. From a fledgling wine importation business, Banfi Vinters began to pioneer America’s introduction to Italian and European wines.

Succeeding their father in the now prestigious family business, brothers John and Harry Mariani set out for expansion, with a view to establishing a wine producing estate in their native homeland. The focus of their acquisition became the medieval Tuscan castle formerly known as ‘Poggio alle Mura’ or ‘Walled Hilltop’, which had fallen into a state of disrepair following World War II. For its strategic position between Sienne and the Tuscan seaside (Maremma) and the fertile soils surrounding it, the Castello di Poggio alle Mura had been contested over for centuries, before remaining under family-ownership by a member of the local aristocracy for over four hundred years. In 1978, immediately after their acquisition, the Mariani’s began restoring the structurally precarious property to its former splendour, thus giving birth to Castello Banfi.

The present day Castello Banfi estate extends to the south of Montalcino, incorporating over seven thousand acres of land, one-third of which is under a constellation of single vineyards, the remainder occupied by olive groves, fruit trees and woodland. Slightly further afield, Banfi’s dedication to Tuscany has seen them venture to new territories, among the most evocative of the region: Bolgheri (home of the ‘super Tuscans’, Sassicaiai and Ornellaia), where a small estate produces a Bolgheri DOC from international grape varieties; the Maremma, a territory dedicated to the production of Vermentino; and Chianti, arguably the global ambassador of Sangiovese and Tuscan wine.

Will Whitby from Castello Banfi’s New Zealand importer, Federal Merchants & Co, comments: “Castello Banfi produce phenomenal wines and we are thrilled to offer them to NZ wine drinkers, many of whom will have first-hand experience of Tuscany. We have purposefully tasted and chosen a small and accessible selection of their range, but we fully expect to increase this over time.”

Currently available in New Zealand at selected retailers, bars and restaurants are the following Banfi wines. From the top-tier Castello Banfi label (ie fruit from the estate’s single vineyards in Montalcino) comes: Brunello di Montalcino DOCG, the flagship wine from 100% Sangiovese, aged for a minimum of two years in French and Croatian oak barrels before another year in bottle; andCum Laude, Latin for ‘with honours’, an innovative cuvée blending Cabernet Sauvignon, Merlot, Sangiovese and Syrah. From the exciting territory of Bolgheri, Banfi’s Aska combines Cabernet Sauvignon and Cabernet Franc from a specialist five hectare site. From the Tuscan coast (the Maremma), La Pettegola Vermentino is a full-bodied yet aromatic white, reminiscent of Viognier. The best value offerings come in a triumvirate: a classic Chianti DOCG and the two New-World-styled Colle Pino and Col di Sasso, blends of Merlot Sangiovese and Sangiovese Cabernet Sauvignon respectively.