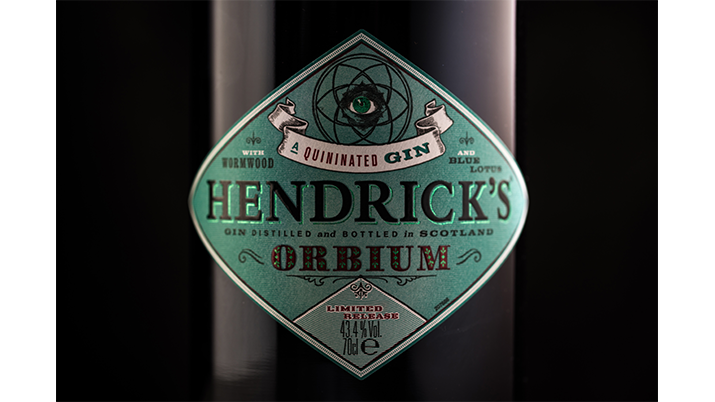 HENDRICK’S GIN REIMAGINED IN A PARALLEL UNIVERSE AS ORBIUM!

Hendrick’s has expanded the taste spectrum with the launch of a new experimental gin forever known as Orbium. As a reimagining of Hendrick’s it is instilled with extracts of Quinine, Wormwood and the mysterious Blue Lotus Blossom and has an oddly exquisite flavour that sits roundly on the palate. It’s what Hendrick’s might taste like in a parallel universe.

Orbium is a new expression from Hendrick’s, created by its Master Distiller, Lesley Gracie. Lesley possesses a fierce curiosity and an absolute skill for creating new and expansive tastes and flavours using an array of botanicals. Orbium has been born from this natural inquisitiveness and follows on from previous trade-only liquid innovations.

Orbium contains the same distillates as Hendrick’s, however the same remarkable mind that broke conventions by infusing gin with essences of cucumber and rose has now taken gin in an altogether new direction, by infusing flavours that are traditionally associated with classic gin libations; quinine found in tonic (G&T) and wormwood found in Vermouth (Martini’s). But it is not quite Orbium yet. The addition of blue lotus blossom exquisitely balances the overall flavour and the trinity of these essences combines to create a complex gin with surprising brightness and a finish that is uncommonly long. The result is an unfamiliar taste that is oddly familiar in character, designed to open previously unexplored dimensions of gin as it spirals from floral into an altogether deeper and alluringly bitter place.

Orbium derives from the word ‘orb’, the plural of Orbis and the Latin for circle. It is inspired by Lesley’s description of the liquid’s journey. It represents the spherical round taste that Lesley refers to when describing the Hendrick’s house style. It brings to mind a circular image through its sound with an underlying reference to revolution and orbit. It is beautifully presented in the same iconic apothecary style bottle that is now synonymous with Hendrick’s, albeit in a sumptuous dark blue, inspired by the key essence of blue lotus blossom. It also features an ‘all seeing eye’ on the label, as a continuous circle and a reference back to the liquid’s rounded character.

In 1999 Hendrick’s Gin launched with a mission to celebrate moments of delightful peculiarity in the world that was perhaps most perfectly personified by the decidedly odd methods employed in production and the unexpected infusions of rose and cucumber used to consummate this most unusual gin. Initially met with disbelief; (“Bartender, there’s a cucumber in my gin!”) Hendrick’s Gin was eventually adopted and loved by a tiny handful of individuals around the world that has since grown. Thus, Hendrick’s is pleased to report that, through its own assessment, the world has become an altogether more unusual place (not to mention more delicious).

Invention has always been at the heart of the gin maker’s DNA and Lesley is constantly exploring innovative ways to excite the bartender world with unusual flavour combinations. Hendrick’s, with the additions of the now iconic cucumber and rose, was the first step on a journey that saw Battersea and Quinetum cordials launched exclusively to the bartender community. In 2014 Lesley undertook an expedition to the Venezuelan rainforest in search of exotic new botanicals and flavours. The subsequent launch of the limited edition Kanaracuni Gin (325L) was the latest in a line of bartender exclusive liquids, however, for the first time one of these experiments has been made available to bartenders beyond sample quantities.

Orbium is solely available solely in a handful of markets around the globe.

For further information go to www.hendricksgin.com/orbium