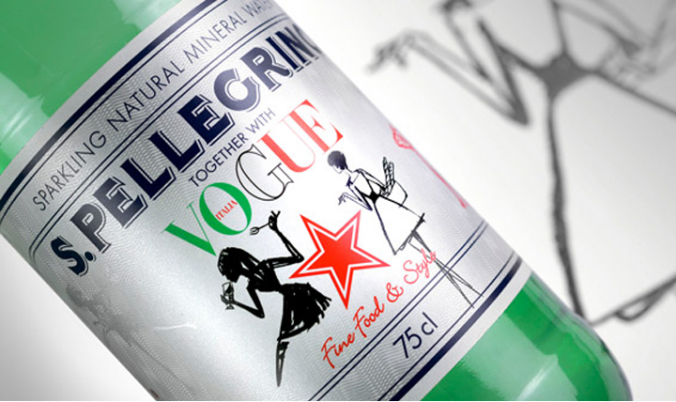 S.Pellegrino, the world famous sparkling water, presents its new special limited edition bottle designed in collaboration with Vogue Italia as part of ‘Talents and Food’ – a global initiative aimed at supporting the world’s most talented young chefs and young designers.

Vogue Italia and S.Pellegrino, both synonymous with Italian style and the art of European living, are bringing together some of the world’s most talented young chefs and emerging designers to compete in a global challenge combining taste, art and fashion.

Twenty young chefs and 20 young designers have been paired together by region (consisting of 20 regions around the world) and will travel to Milan in June to compete in the S.Pellegrino Talent Awards, as part of Expo Milano 2015.

This is the culminating event for 2015 S.Pellegrino’s Young Chef competition whereby a selected panel of seven internationally renowned chefs will judge young chefs’ signature dishes and crown the 2015 Young Chef of the World. The emerging designers will be challenged to create a design that interprets their Young Chef’s signature dish and Vogue Italia will award the best Young Designer. NZ-­‐born Australian based Peter Gunn of Attica, the Pacific region Young Chef finalist, and Australian designer Christopher Esber will represent the Pacific region at the S.Pellegrino Talent Awards, Expo Milano, 27 June 2015. The limited edition S.Pellegrino Vogue Italia bottle will be available from April 2015 in leading restaurants for a limited time. For more information, visit www.finedininglovers.com, the online magazine for food enthusiasts proudly endorsed by S.Pellegrino and Acqua Panna.